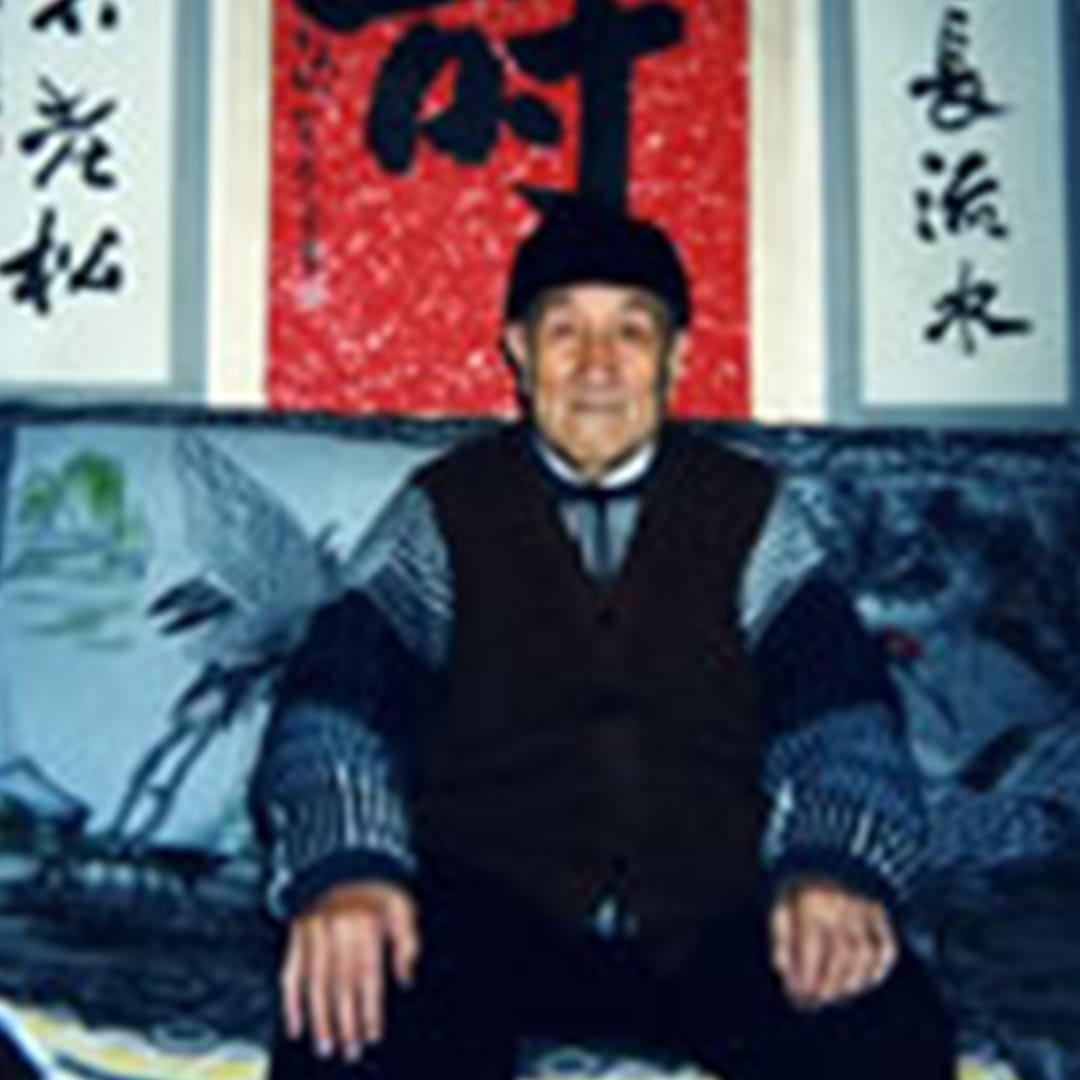 Master Ma Yueliang - the son-in-law of the credited founder of the Wu Style, Wu Jianquan - was born at the turn of the Century, and lived until recently in Shanghai. He had possibly the most complete knowledge of the Wu Taiji system apart from the founder himself. I first met him in 1991 when we looked after him for a few days before his return to China. He had been visiting family in various countries around the world. He offered a demonstration at our school in return for hospitality received. Most interesting was the Fast Form. He completed the first half and then sat down. This apparently was all he ever showed. Then, after looking thoughtful for a minute he stood up and completed it, apparently for the first time ever in public.
Though normally talking little, Master Ma and I finally established a good conversation, when I realised he understood better English than the translator we were initially using. He explained that he had been a professor in medical biology at Shanghai University before the Second World War. Many of the other professors were from the USA and some of the teaching was in English. Interestingly as well, I discovered, he was good friends with Grand Master Cheng Man-Ching, and that they met daily and 'practiced Chinese chess' together over a period of 3 years. That two of the greatest exponents of Taiji in the world managed to met daily and only play chess, I find a little hard to imagine.
Master Ma was generous enough to do some free pushing with me, and I found his excellence to be in the realm of the Yi or Deep Mind. Though I had made this aspect of Taiji my speciality, I had no chance to match this 93 year old man with almost 80 years experience. I asked him my weaknesses, and one that he mentioned was that I kept my arms too close to my body, giving the partner more chance to attack. Later when I showed a video of Master Ma to my teacher Master Huang, his first comment was that Master Ma kept his arms to far out! Obviously from this it is clear that both methods can be made to work. Personally I believe that it is better to practice short - where one mistake is not fatal - and use it long in serious circumstances. Master Ma expressed the wish to live in New Zealand where he would be free to teach his Inner Spiritual Work. At present, after decades of restriction, he is now free to teach Taiji, but near the end of his life, this is no longer his need.
It is said that he and his wife can see very clearly a persons energy field, and by the state of that field, decide whether or not to teach that person. One night, as we all sat in a restaurant with Master Ma reminiscing about the old days in China, I, who had been very busy all day, decided to draw in a little energy from my usual source. With no outward sign, and while the others talked and listened, I began. Master Wu - the daughter of Wu Jianquan and wife of Master Ma - immediately saw something and whispered to her husband, who then also took an interest. My Mandarin was good enough to know that they could see the effects of what I was doing, and this little occurrence was enough to convince me that the stories about their energy sensitivity were true - not that I had ever really doubted them.
I returned to China at the end of 1994 to pay my respects to Master Ma and ask him a few questions on the deeper aspects of practice. I found him still in good health, even though about to turn 95 years old. His mind was exceptionally alert and he divined the essence of my questions at once, thereafter spending many hours explaining and illustrating the ideas involved. He was still living, with his 91 year old wife, in the family house of Wu Jianquan and at one moment pointed out the very old chess board behind his chair on which he and Cheng Man-Ching had played 60 years ago. Though I was from a different style, he was completely open with his teaching. This supports my belief that if a person is still concerned about styles after more than 14 or 15 years of practice,then they are off on the wrong track in their own learning. I do know there were some of his followers who felt he was teaching me too freely and tried to stop him, but a person like Master Ma does what he feels is appropriate.

Questions and answers from this occasion.

Q: What is Peng Jing and is it better to maintain a little in the arms for example to prevent people from coming in?
Master Ma: People misunderstand Peng....more [EN]

A Conversation with the Great Ma Yueliang.

Interview by Inside kung-Fu magazine.

Q: What do you remember most about Wu's teaching?
Master Ma: He never changed the Form. I teach the origional syle of Wu Chien-chuan. ...more [EN]

While visiting Master Ma in 1994, I (Patrick A Kelly), met Wang Hao Da in Shangai. He was described as the most technically accomplished of Master Ma's students left alive; although I was told he was only second best to another student who had recently died. However I both observed and was told that Wang Hao Da was not known for his spiritual inclination, which caused some disconnection from Master Ma in their later years.
Following are two interviews with Wang Hao Da which describe well Master Ma's methods:

In 1923 Shanghai was one of the outstanding cosmopolitan centers of our planet. In addition to the transient panorama of the time, including leading politicians, socialites, bold criminals, and imperialistic carpetbaggers, it was a great center of Martial Arts. Regularly occasioned by the great Boxers of the day like Chen Fake, Yang Cheng Fu, Wu Chien Chieh, among others, there also lived a young Daoist named Ma YueLiang. It was in this year that Wang Hao Da was thrust headlong into the doomed city. ...more [EN]
The development of high level martial skills in Taijiquan involves cultivating the ability to connect one's own intention with the intention of the opponent, according to Wang Hao-Da, one of the top students of the late Master Ma Yueliang. ...more [EN]
← otherteachers