The Essence of Awakening to Reality 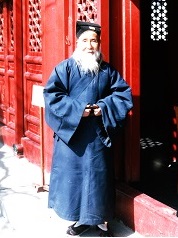 The classic 'Understanding Reality' says: "Before you have refined the restored elixir, do not go into the mountains. In the mountains nothing within or without is real knowledge". "The ultimate treasure is in everyone – it is just that the ignorant do not fully recognise it.

Beginning by doing, no one sees; when non-doing is reached, everyone knows. Only seeing non-doing as the essential marvel, do you not realise that doing is the foundation?" Doing and non-doing each have their time.

The ignorant who do not know this, without having found what essence, life and cultivating the Dao are, learn some auxiliary methods, roundabout routes and minor techniques, then immediately go into the mountains to practise quiet sitting, shutting off their senses and stilling their minds, and consider this to be non-doing. This is a mistake.

To help people on the earlier stages of the Way, Wei Po-yang (1?? AD) composed the Triplex Unity using images to present the imageless and forms to allude to the formless. This was the beginning of the term 'gold elixir' and the technical symbolism of lead and mercury, dragon and tiger, cooking and refining, and so on. Later, many realized people composed treatises to expound the subtle principles, all based on the Triplex Unity.

However, many who later read these texts did not look deeply into the meaning of the symbols. Seeing talk of gold, lead, mercury, cauldron and fire, they thought it referred to the preparation of potions and drugs to ingest and they took to chemistry. Seeing talk of dragon and tiger, raven and rabbit, they thought it referred to internal organs and they took to visualization exercises.

Symbols are representations, speaking of one thing to allude to something else. All great teachings use metaphors to illustrate principles. When you get the image forget the words; when you understand the intent then forget the image; then you will be close to the reality.

On going along and reversal

Ordinarily, after people are born, as they grow up they become imbued with temporal conditioning; inwardly, emotions and desires distract them from reality, while outwardly objects and events tax their bodies. They take the false to be real, take the aberrant to be correct, take misery for pleasure; following their desires to any lengths, they deplete their original vitality, energy and spirit almost to the point of exhaustion, and thoroughly obscure their inherent round and bright true essence, unwilling to stop until they die.

Thereafter they undergo birth after birth, death after death, sunk for myriad aeons; this is what is called throwing oneself to one's death even without having been called by the king of death.

People of great wisdom reverse the operation of the natural process; they make temporary use of things of the world to practice the celestial Dao; They uproot the mundane senses and sweep away all acquired influences; Restoring original being, they avoid compulsive routine, transcend the lower worlds and become incorruptible.

But the secret of this celestial mechanism of practising reversal in the midst of accord, must be understood internally under the guidance of a true teacher, for it cannot be known through arbitrary guesswork or bright ideas. Unscrupulous people all over the world use their own meager light and narrow views, memorize a few sayings, ponder a few mystical stories and think they know the Dao; seeking no further for guidance, they become charlatans, self-appointed preachers who are blind themselves and take in others who are blind.

There are many such auxiliary methods, side doors and false paths. What people do not realize is that 'reversal' means going back to the spiritual origin of life, not these various practices in the physical sphere. Although the true method is called reversal, in fact it is action in natural accord with Dao.

When the alchemical classics and writings of the masters speak of gathering and refining substances to make gold, they are referring to primordial, formless, immaterial realities, not to mundane external substances and not to physical substances in the human body. The 3 treasures (jing, qi and shen) are not material, but formless realities. As an ancient adept said: the true vitality (jing) is not sexual vitality, the true energy (qi) is not metabolic energy, the true mind (shen) is not the thinking brain (including its quietly watching state). Those who ingest external substances or who are obsessed with the body in their search for truth, should wake up when they hear this.
← daoists