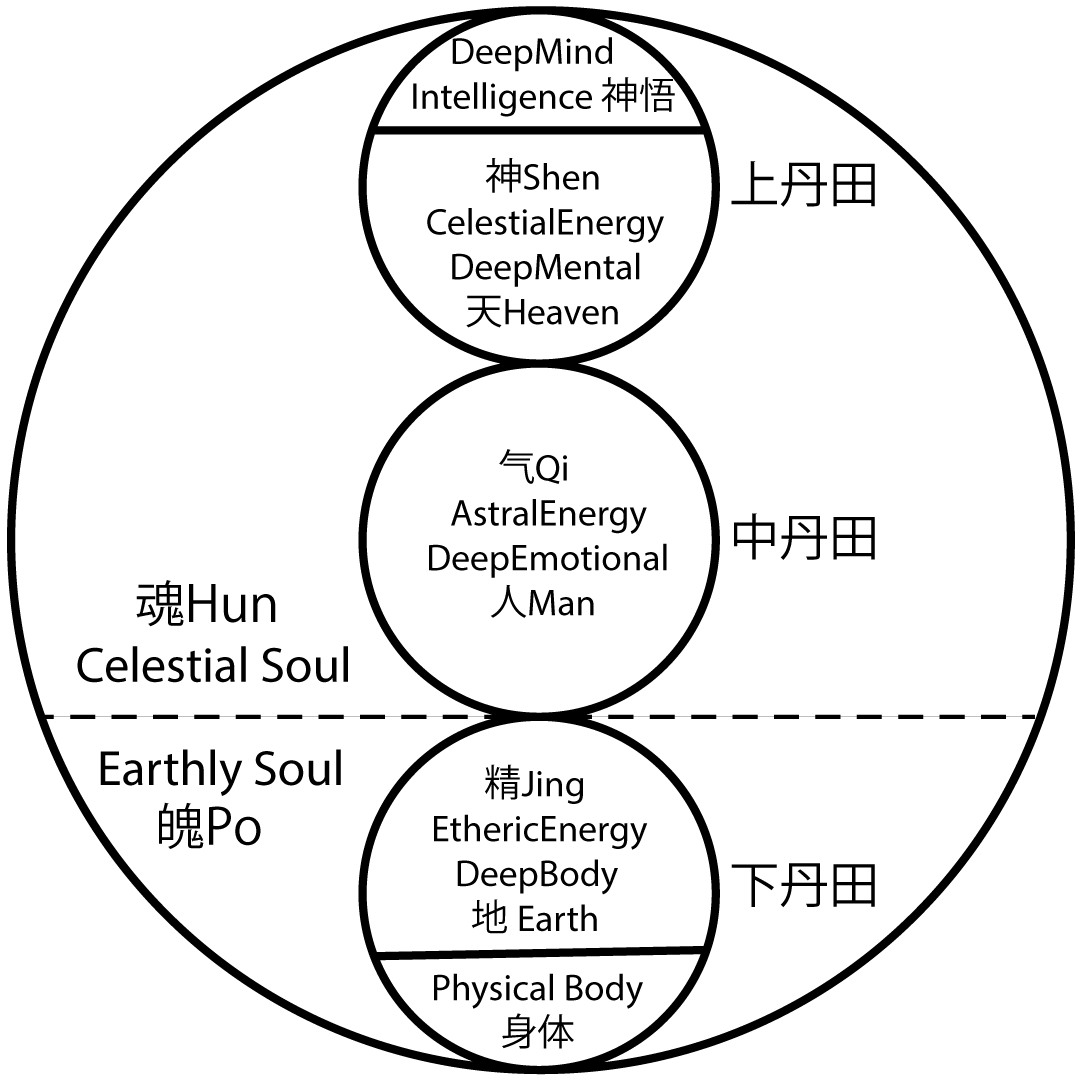 Humans express themselves simultaneously within these 3 levels.

Their essential existence is on the Deep Mental level, they are gradually developing consciousness within the Deep Emotional level, and are fully functioning on the Physical-Etheric level.

Because the lower levels of the Etheric appear to the brain consciousness as physical and the upper levels of the Deep Mental receive the influence of the Spirit, these 2 parts may be considered separately – then the division into the 5 aggregates appears.

The mind – utilising “mind” in its widest sense, including but not limited to its common meaning of the brain functioning – from its most superficial to its deepest and most subtle essence – which is the point of connection with the Spirit – is central to the understanding of life and the path of internal refinement. Consequently, a small error in its use will interfere significantly with the learning process.

While our Spirit may be the ultimate, it is the mind that must travel the Way. Our Spirit, in the highest sense is already there, while our body, including our brain, is merely the tool of the mind. At death, nothing dies. The mind in its essential form simply abandons the body. Energy follows the mind and the body, de-energised, decays back into its constituent parts. The Spirit was neither in the body during life, nor has need to leave it at death. Neither was the mind within the body – more accurately, the body existed within the mind.

There is a recurring debate throughout history of whether the brain generates the mind or the mind generates the brain. Neither of these beliefs is simply correct. Both are true. The mind is a mixture of Deep Mind that proceeds the brain and superficial-mind which is generated by the brain when it is activated by the Deep Mind.

The Deep Mind of an undeveloped person, in its projection into the three worlds of human existence, is weak in the sense of consciousness, will and intelligence. When out of the body, before or after death, it is relatively powerless. While in the body its power is magnified and possibilities for change appear.

Through great effort to change in the physical world, gradually the power of the Mind is increased on the deeper levels. When the strength of the Deep Mind is sufficient, the cycle of return to the body is broken and the True Self is free within the 3 worlds of human existence.

The immediate question is how to strengthen the deeper aspect and lessen the superficial aspect within the consciousness. The influences on the energy sphere (3 levels) of the Deep Mind are always a mixture of Deep Mind Intelligence and the body (including the endocrine system and brain).

The way to the Deep Mind Intelligence and back is through the deepemotions. While sitting quietly, going deeper, some deep contact may be established after years of practice. But when moving about in life, the unrefined body systems, under the pressures of life, re-assert control of the energy sphere, interfering with the deeper contact.

Attempting to remain in a deeper state while handling the difficult situations of life is the most important method to gradually purify the deeper energy patterns, bringing them more under the control of the Deep Mind Intelligence and less under the body.

Interpersonal relations are the most useful source of difficult situations. Attempting to remain deeply calm but fully involved, never blaming the other for your internal disturbance, never justifying the negative states that arise, change yourself while understanding others. Retreating from life, to quietness, external or internal, is a mistake.

Use “Daily Dying” to go back over those difficult interactions, while in a deeper state. Then your common unrefined reactions and their causes should become clearer to you.

The Soul forms within the sphere of the Deep Mind. The state of the energy on each of the 3 levels along with the minds ability in its 3 aspects – consciousness, will and intelligence – on each of the 3 levels, is the ground condition in which the Soul may grow. The seed to the Soul is the Deep Mind Intelligence or the lowest aspect of the Spirit.

Practical aim is to connect Mind-energy-body. Distant intention is to connect Spirit-Mind-body. Meditation is of two types; Mind to energy [Qigong] and Spirit to Mind [Neigong]. Practically speaking, find Deep Mind and all above will be included in that. Train Deep Mind and its surrounding energy body. Deep Mind is Buddha Mind – look deeper in yourself for it.

Energy body is Soul, Deep Mind is intelligence of Soul. Interaction of Mind and energy field produce psychological states. Some states useful for increasing understanding, some go towards solidifying our subjective idea of ourselves [ego], and interfere with the steady progression towards the Deepmind. Difficult to see and dissolve these formations within the energy field.

A teacher who is experienced in these things can apply pressure on the student to help them dissolve the blocks and move on again. If the student is too proud or insecure they will take this pressure in a personal way and react against it.

After about 4 or 5 years expect some such trouble. Around this time their 'ego' begins to appear and they experience conflict between reality and their hopes or beliefs. If they hoped to be better than they are, they may blame you and leave for another teacher. If they believe they are better than they actually are, they may get upset when corrected, leave, and often start teaching as independent teachers.

Not many escape these traps, but if the student’s wish to learn and go deeper is true, they will easily pass through them. Pushed by a well trained teacher and pulled by the Deep Mind, success is inevitable if people keep going.

The Beyond operates out of time as we know it. This is barely understandable to the Deep Mind and unknowable to the superficial-mind. The idea of 'being in the present' does not even approximate it. The quietly observing brain state of 'being present' actually operates in the past, not the present.

The mind, on each of its levels has 3 aspects – awareness, intention and intelligence (reflected in the 3 types of neurons – sensory-neurons, motor-neurons and inter-neurons). Awareness operates in the past, intention in the future and intelligence in the present.

Similarly, when we sense our own foot we are aware of its state as it was some time earlier, whereas when an intention forms to move the foot, this intention is in the future relative to the resulting movement of the foot.

It is the hidden intervening intelligence only which acts in the present. This intelligence or pure being is beyond the reach of awareness.
← worldwideway