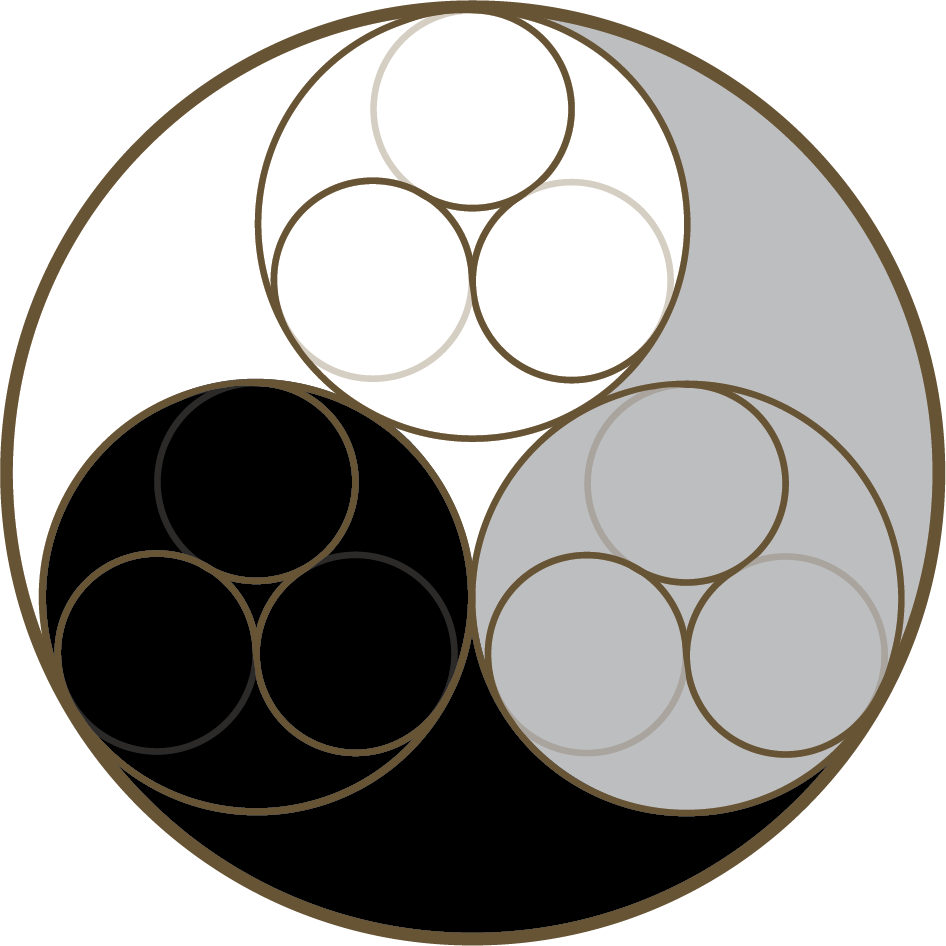 The purpose of life is growth of individual consciousness.

Outer life supports this, while the inner process goes on at a deeper level than the ordinary mind can perceive.

Spirit exists in the Ever Present Here and Eternal Now. Eternal Now includes past, present and future which exist equally and simultaneously. The Divine Presence is at all places, on all levels, at all times. Only the focus of expression changes from one world to another, either physically distant, internally distant or distant in time.

People come into life with their own triple-aspect Deep Essence, plus a genetic contribution from their parents and grand-parents. Knowledge of each persons triple essence is deeply buried in their Mind. This Deep Essence is expanded at birth to form the Personal Energy Field and modified by the subsequent Earth life. The overall quality of life, especially decisions made at crucial moments in life, determines whether that individual evolves, stagnates or spirals down.

Humans accept certain limits while on the Earth in order to provide conditions for development. We are restricted to the body. The inner levels are veiled. Past and present are obscured. All conscious memory of the pre-life condition is removed and it is not till a person begins to function freely within the Higher Energy levels that this memory is clearly regained - although vague and unreliable traces of it are sometimes discovered by those who are psychically sensitive in the Lower Energy levels. Choice is created by this veiling of the Spirit from the superficial consciousness. Attachment to the senses is the result. These lead to identification of the self with the body, which is 'spiritual ignorance'. Consequently, Mind must then make the choice to respond either to internal influences from above, or to external influences from below. Resurrection of Sri Yukteswar EN. Resurrection of Sri Yukteswar DE. Resurrection of Sri Yukteswar FR.

On physical death, the Deep Mind withdraws from the Physical body and then, according to its state, progressively over time from the Lower Energies (Etheric, Astral and Celestial). The Personality or Ego fades as the Personal Energy Field gradually dissolves. The essential experiences of that life, on each level, are condensed as Deep Essence and withdrawn within the Deep Mind. People are divided at death into three general categories - those who remain on the Earth, those who return to the Earth and those who move on to a higher evolution.

Those who remain after death have cut themselves of from their Deep Mind and Spirit by their actions and attitudes during their life. They continue to exist on the Earth for a time in their Shadow Bodies composed mainly of the most gross Lower Energies (Etheric).

Their Deep Mind is de-energised by the withdrawal of the Spirit and Higher Energies. The Shadow Body, along with the accumulated triple essence from their past lives, gradually fades away over about 21 years and that person ceases to exist as an individual. The life energies, along with accumulated patterns, dissolve back into their sources to be recycled.

They contribute to the energy field of the Earth in an unconscious general sense, as do animals. This absorption of the particular characteristics created by the individual is done from compassion, avoiding the almost hopeless suffering the person would experience in future lives, and freeing the Spirit for a new attempt.

Those who return have lived a life where the consciousness has not completely attached itself to the body. That part of the Personal Energy Field that can be freed from involvement with the body is condensed in its essence back into the Deep Mind within which consciousness continues. The Shadow Body, un-constrained by any directing intelligence, dissolves, over 3 to 7 days, back into its constituent parts. The Deep Mind dies to the Earth but is simultaneously born to another existence.

Each of the planets has an intelligence and energy level relative to its position within the energy field of the Solar System and it is to their corresponding place that the person is drawn. This is the same existence the person experienced in deep sleep during their life on Earth. After a period of time within the energy field of some particular planet - exactly one lifetime in that new existence varying anywhere between 3 years and 5 hundred years depending on the energy level to which they have withdrawn - people are attracted back by their Deep Essence to be reborn on the Earth in another body.

Each rebirth the Personal Energy Field is recreated by the Deep Mind based on a combination of the accumulated Deep Essence from past lives, parents genetic and energetic contributions, and surrounding life conditions. The 3 Minds must be newly regulated, strengthened and refined and a new Personality forms in the early life of the individual. This is the ground conditions in which the seed of the Soul may grow.

Past family ties are one important factor affecting the circumstances of rebirth, but also any strong energy connections such as love, hate, or dependence. There is also a factor of choice from the Spirit as it seeks to repair damage its previous incarnations may have caused and repay those it may have treated badly, often by seeking the opposite role as the sufferer.

Men may come back as women and women as men. Africans, Europeans, Asians, etc, often change races and experience the other side of racial disharmony. Religious Jews, Christians, Muslims, Buddhists, Hindus etc, will change places if there has been religious persecution or hatred on their part. The rich may return poor and the dominant classes may return as the subservient. People are given this chance to learn and change but often just repeat their mistakes and take revenge for what they perceive as a new mis-justice.

Those who move on (resurrected in the higher worlds), have both tuned the Deep Mind predominantly to that of the Higher Energies and the Spirit, and worked through the accumulated obligations from their past. The 3 Minds have evolved within the Personal Energy Field which has been gathered, refined and crystallised into the Sphere of the Deep Mind (Crystal Body).

At death the individual consciousness is withdrawn completely into this Crystal Energy Body where it continues to function with will, consciousness and intelligence, experiencing no further need to be reborn on the Earth. These Beings are on various levels. A few who have only passed the second initiation and who would usually return to the Earth, may, under certain known conditions, be able to remain in the Astral (2nd energy level) and work on from there.

Others past the 3rd initiation will remain on the Celestial (3rd) energy level. Only those passed the 4th initiation are truely free and may enter the spiritual higher energy levels (4th energy level and beyond).

Scientists and religious leaders endlessly argue whether consciousness arises from the brain or consciousness comes first and the body-brain system after. Neither can disprove the other as the real truth is a mixture of both. Brain Consciousness

How we see ourselves is the ego. It is a thin layer of self-awareness trapped between an outer shell or face and an inner shell. 所谓自我，即人们对自身的观点和看法，它介于外在自我层或说表象与内在自我层之间，很薄。 Ego

Most teachings warn about opening yourself up to the inner levels through meditation without being closely connected to some developed teacher and their past teachers. This is because of the possibility of interference from partially developed beings on the inner levels. NegativeBeings Jinns

Accompanying every person on the Earth is an Inner Guide, who has developed themself to the level of the 3rd initiation in a previous life on earth or possibly elsewhere. Inner Guide

Non-attachment to the good and the bad that surrounds you means more when practised in life than when practised in sheltered circumstances. Life on the Earth, with all its seemingly contradictory processes, is an exactly appropriate expression of the Divine in this particular time and place. The Earth is a training ground and the conditions are perfect for the lessons we need to learn. The Divine has an inner and an outer expression, spiritual and worldly. Our purpose is to integrate the two.

ALl great teachers advocate students developing themselves while living a normal life. 'In life but not of life' say the Sufis while the ideal of the Daoists is to achieve a balanced harmony with the subtle natural processes of the Earth, solar system and universe including all its forms of life. The struggles you make to improve your present situation are the ones that will best help your inner-being. Wherever you are is the best place from which to refine yourself.

Sufi Sheikhs & Daoist Sages are free to live a caring sharing family life. They are also free to earn their own living, not depending on charity and the labour of others. Using the difficulties of an un-sheltered life, Sufis work psychologically on emotional energies, replacing unconscious negative emotions with the conscious practice of love and its aspects. Their work on the body is mainly denying, withholding food, sleep, sex, and comfort.

Following the natural principles of the Earth, Daoists work more on the body and its energies, replacing unconscious tensions and actions with the conscious practice of relaxation, responsiveness, awareness and control. Their work on emotions is mainly denying, using calmness to withhold energy from anger, jealousy, fear etc.

As both Sufis and Daoists use the intellect to administer the process, a type of balance is established where at least two of the aspects are harmonised (intellect and emotions, or intellect and body), while the third is regulated by these two.

'Tis all a chequer-board of nights and days,
Where destiny with men for pieces plays:
Hither and thither moves, and mates, and slays,
And one by one back in the closet lays.

The Ball no question makes of Ayes and Noes,
But Right or Left as strikes the Player goes;
And He that toss'd Thee down into the Field,
He knows about it all - HE knows - HE knows!
← worldwideway